Pine Mountain Vineyards is dedicated to producing the exceptional wine grapes expected by artisan winemakers and premium wineries. The vineyard is located on the upper western flank of Pine Mountain about 7 miles from Cloverdale. Our farming practices are well adapted to the high-elevation setting and reliably deliver harvests of fruit intense in color and flavor. Our viticulture philosophy is to tailor our winegrowing to meet the specific styles of each of the wineries we serve. The Elevation, Soil, and Climate of Pine Mountain Vineyards

The defining characteristic of Pine Mountain Vineyards is its elevation, with all of its 36 acres of vine-planted blocks spread out between 2,200 to 2,800 feet, the large majority facing south or southwest. The mountainous terrain is typically steep; the soil is shallow to moderately deep, very well drained, and contains large components of sand and gravel. Prominent soil types are Cole Loam and the Hopland-Witherell-Squawrock Complex. The micro-climate of the vineyard exhibits all the characteristics associated with high-elevation viticulture. These include cooler daytime and warmer nighttime temperatures than in the valley, longer sunlight hours, and cooling oceanic breezes. An analysis of growing season degree-days at Pine Mountain Vineyards shows that it is very similar to high quality Cabernet Sauvignon sites in southern Napa Valley. With its unique combination of features, the Pine Mountain Vineyards terroir favors the production of fruit that is intense in flavor and color, with clusters that are typically only one-third to one-half the size of valley-grown grapes.

“I have been involved with the Pine Mountain Vineyards for four years, initially as an acquisition candidate, and now in an advisory role with the new owners. In tracking four seasons of temperature data in the lower block of the vineyard, the growing season Degree Days have consistently been near-identical to temperature stations I have in vineyards north of Napa City (Oak Knoll, Silverado Bench areas). This temperature pattern, combined with the high elevation and well-drained mountain top soils, has always struck me as a superb site for growing the highest quality Cabernet Sauvignon. I look forward to seeing the product of passionate winemakers from this historically under-utilized vineyard.”

Pine Mountain Vineyards is a family enterprise dedicated to growing the best grapes and creating the best wine from the Pine Mountain terroir. To that end, we apply the latest advances in the science of viticulture and the practice of precision farming with an emphasis on managing and exploiting the effects of high elevation on vine stress, bud setting, and cluster development.

The Vineyards comprise 36 acres of vine-planted blocks spread out between 2,200 to 2,800 feet elevation, the large majority facing south or southwest. 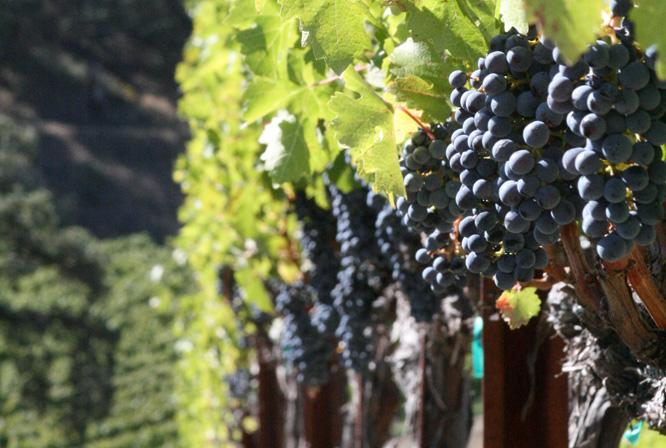 Ampère late harvest, high-elevation wines convey the true expression of the Pine Mountain terroir, our high-elevation farming practices, and the artistry of winemaker Thomas Rivers Brown. Our vineyard, located northeast of Cloverdale on the upper western flank of Pine Mountain, sits at an elevation of 2,200 to 2,800 feet and delivers fruit intense in color and flavor.

John Copeland worked for many years in the property development department of Kendall-Jackson and traveled extensively to identify promising existing vineyards or lands with potential vineyard development for the company. John shared with us the following:

When it came time for him to look for a site for himself, he was attracted to the ranch owned by a retired steel executive on the top of a hillside east of Cloverdale. This was a retirement haven with olive trees, cattle, pasture, and ponds but no grapevines. John saw the potential of the site, convinced the owner to sell it to him, and undertook to develop a vineyard. The first 25 acres were planted in 1998 and the second development of 10 additional acres was completed in 2001.

It was just the beginning of John’s plan. He not only knew the unique character of Pine Mountain Vineyards but also recognized a larger area that shared the same potential and quality for wine grape growing. It was not just a vineyard he wanted to develop but a whole new viticultural area. While he had known for some time that the area had earned a reputation among winemakers for producing excellent fruit (as far back as the late 1880s), he was surprised to find that that this specific area, on the border of Sonoma and Mendocino counties, lacked a descriptive appellation, and was included in the larger non-specific North Coast AVA. Knowing the importance of descriptive appellation within the wine industry, he set about gathering comparative data and found the unique characteristics for growing ultra-premium fruit in this high altitude region (above 1600′) to be richly deserving of their own designation.

“In a general sense, Bordeaux varieties grown in high altitude mountainous environments have the potential to achieve superior flavor profiles compared to the same variety grown at lower altitudes where deeper soils exist. … Grape farming at altitudes in excess of 1600′ has its own set of challenges… but the fruit produced is highly concentrated with rich varietal character. Vineyards capable of producing fruit with such intense characteristics are highly coveted by winemakers.” We Welcome Your Inquiry

Tours of the vineyards may be arranged. Contact us to schedule.